You arrived here from

Maybe you want to buy this domain?

BUY NOW
No Thanks

Technically speaking, cryptocurrencies like Bitcoin aren’t stored in wallets. Instead, they exist as transaction outputs and inputs signed to specific public keys and accessible only by the related private key of the receiving public key.

A realistic statistical glimpse of what can go wrong is that an estimated $9 million worth of cryptoasset theft is recorded daily, with third-party storage, like exchanges, having the highest cases.

For reasons of convenience and safety, hardware wallets are presently the best options for wallet safety. Even more, the Ledger nano wallet is one of the most highly regarded hardware wallets out there, renowned for its exceptional usability and security reputation.

Launched in 2014, the Ledger wallet has earned a reputation for safe seed storage. The catch with the Ledger is its two-level hardware security layer. With this, the wallet stores and protects its user’s seed key in two isolated and very limited storage chips, on its hardware build.

Security Overview of the Ledger

First, in its line of security is the STM32WB55 chip, with very few features to its function, making data retrieval very limited. The design simplicity of this chip is a deliberate limitation toward maximum security.

Second, for seed storage is the CC EAL5+ secure element chip, which is widely used in the banking sector and in international passports. The CC EAL5+ is permanently embedded in the hardware board, giving the encrypted private key absolute isolation.

Also, for users managing large crypto portfolios, the Ledger offers a 24-word mnemonic phrase, which allows users to recover their seed, whenever they lose or have their wallet damaged. Recovery, in this case, is simply through the initialization of their device to restore their accounts, on any Ledger device.

Since radio waves from Bluetooth transmissions could be compromised, the Bluetooth data transmission with the Ledger wallets is end to end encrypted.

How the Ledger Works

Fundamentally, the hardware wallet is an offline device for private key storage; hence all transactions from such wallets can only be signed with the device before it’s propagated across the network, for validation and integration into the blockchain.

To create and propagate these transactions with a Ledger Wallet, however, you will be needing the Ledger Live App. The Ledger Live is the only application compatible with all Ledger devices, and it comes in both mobile and desktop versions. In other words, think of the Ledger Live as the checkbook and the hardware wallet as a unique designated pen for signing off funds from a specific account.

With its custom Operating system, BOLOS, you can securely manage about 22 coins directly with the Ledger Live App and more than 1000 other assets with external wallets. What is more, new coins are continuously added to this list every month.

Once you have a USB or Bluetooth connection from your wallet to a PC or a smartphone, with the Ledger live App, you create your transactions and confirm (or sign) them with the hardware device.

The Ledge Live App allows you to manage your crypto portfolio as you would on an online Multi-currency wallet. Also, on its interface is a price chart to keep track of the price trends of your cryptoassets, and an aggregated sum of the value of the assets in your Ledger wallet. 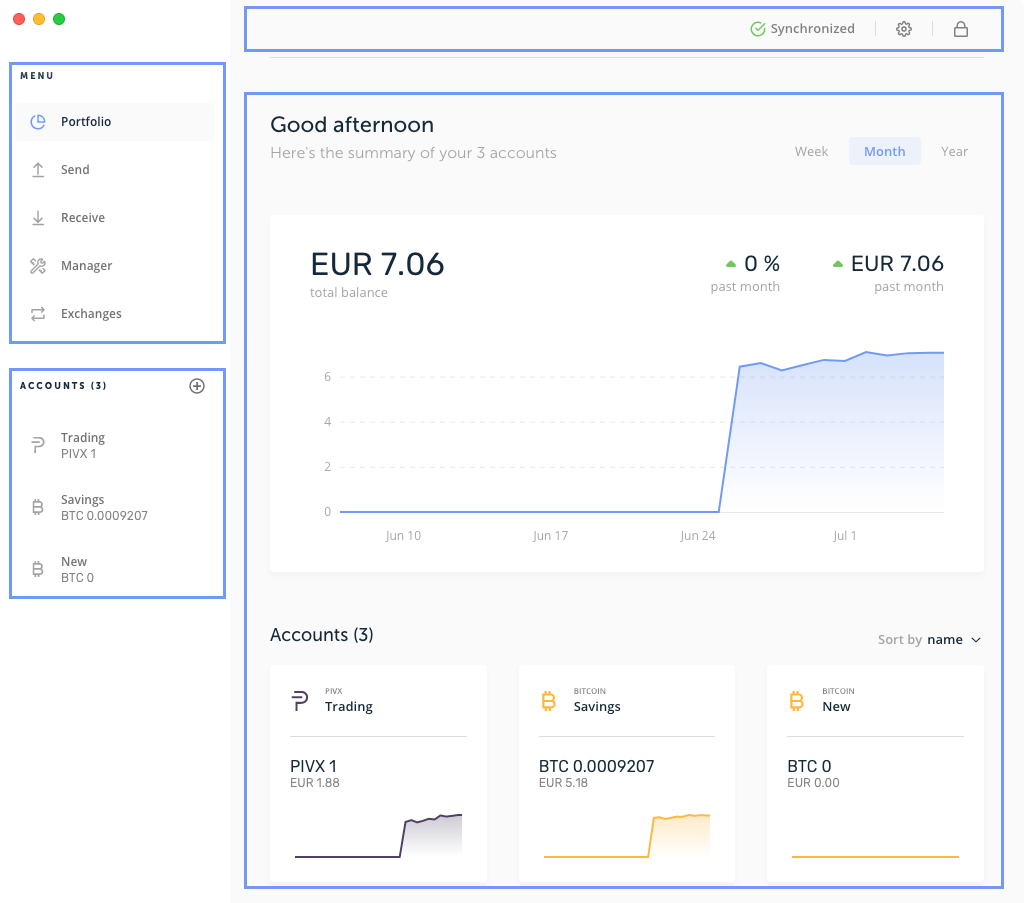 Depending on what your budget and personal preferences are, there are presently 3 Ledger wallets to choose from, although the security framework and Live App interface are pretty much the same, for all 3. Let’s have a closer look at these wallets

This is the first of the Ledger wallet collection and the highest sold of all three of its wallets. The Nano S comes in a 56.95mm by 17.4mm by 9.1mm USB flash drive build, weighing approximately 16g and has an assortment of 6 different colors to choose from. What is more, the wallet comes with one USB cable for connection to your PC or Smartphone.

With this wallet, you have a choice of 22 coins and ERC-20 tokens, to manage from the Ledger Live app, directly from your mobile or desktop device.

Unlike its predecessor, the Nano X supports over a hundred wallet Apps, among the list of compatible Apps, are Bitcoin, Ethereum, XRP, Litecoin and many more; It also has a BlueTooth connection. Although its build, slightly varies in dimension and weight, from the Nano S, with a size of 72 x 18.6 x 11.75 mm and a weight 34g.

This offers the best user experience, with a touch screen user interface, on a screen dimension of 97mm x 68mm, and a weight of 90g.

A downside to Ledger blue is its memory capacity, which only supports just 30 currencies and 11 installable App. For a device that sells at over 4X the price of the Nano S and almost twice the Nano X, one would expect way more than such limited memory. Many believe the price of this wallet to way over the roof.

Steps on setting up a New Ledger Wallet

Before we proceed, we want to assume you are having one of the Ledger Nano hardware wallets and you are ready to configure it for use.

Step 1: Once you have your device, download the Ledger wallet App on your PC/Mobile device. Go over to the App and click on “get started.” 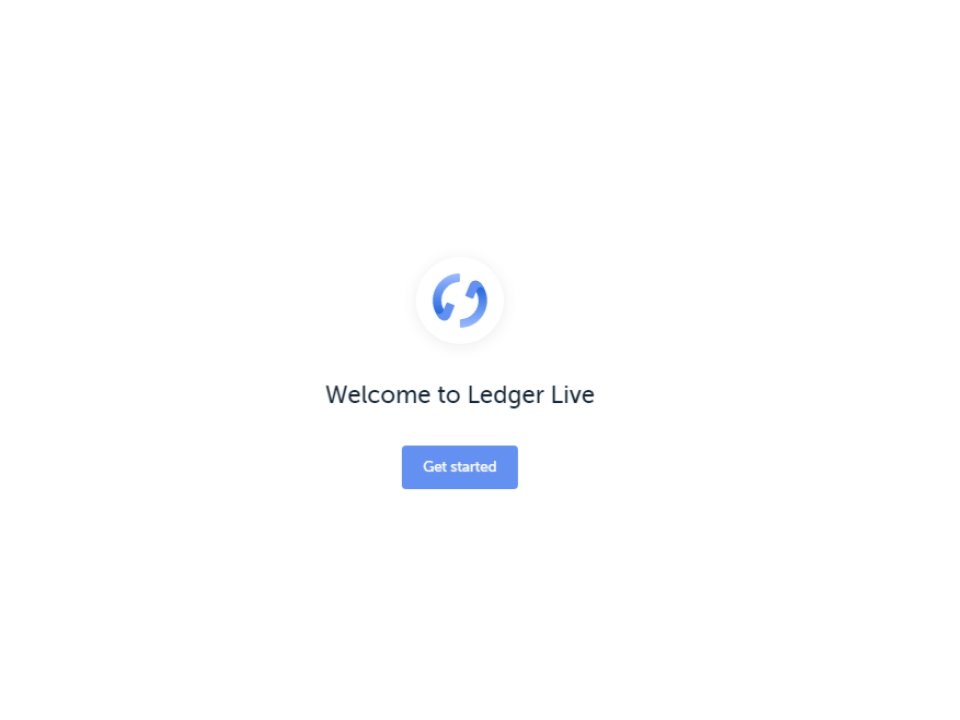 Step 2: Next, you are given a number of options to choose from, which are, 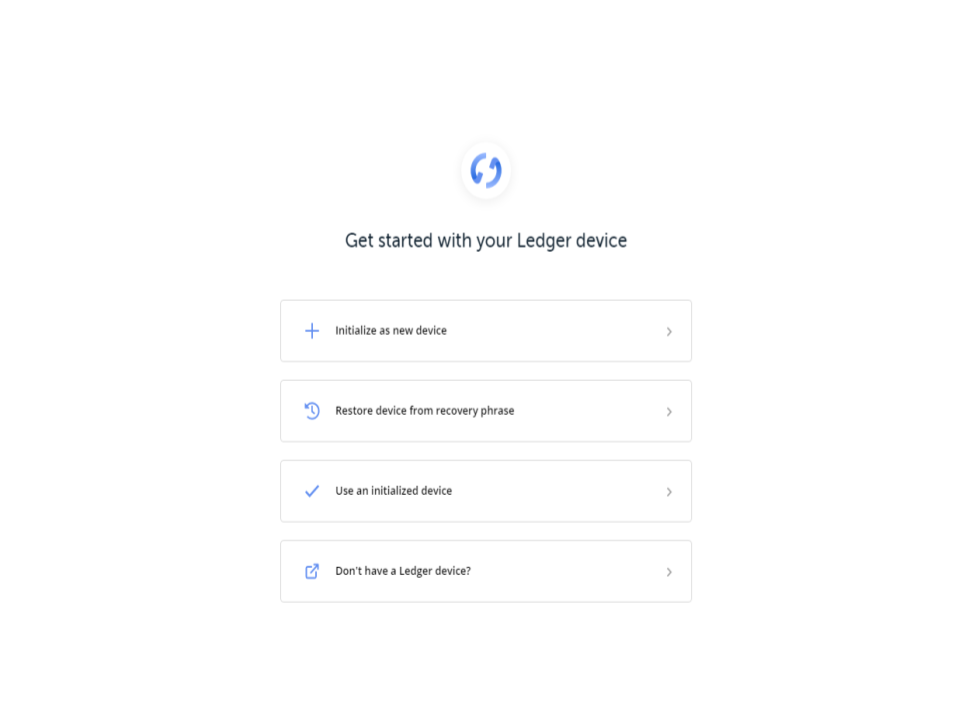 Step 3: Next, images of all ledger wallets will appear on the screen, you will click on whichever device you are holding, and then click on continue. 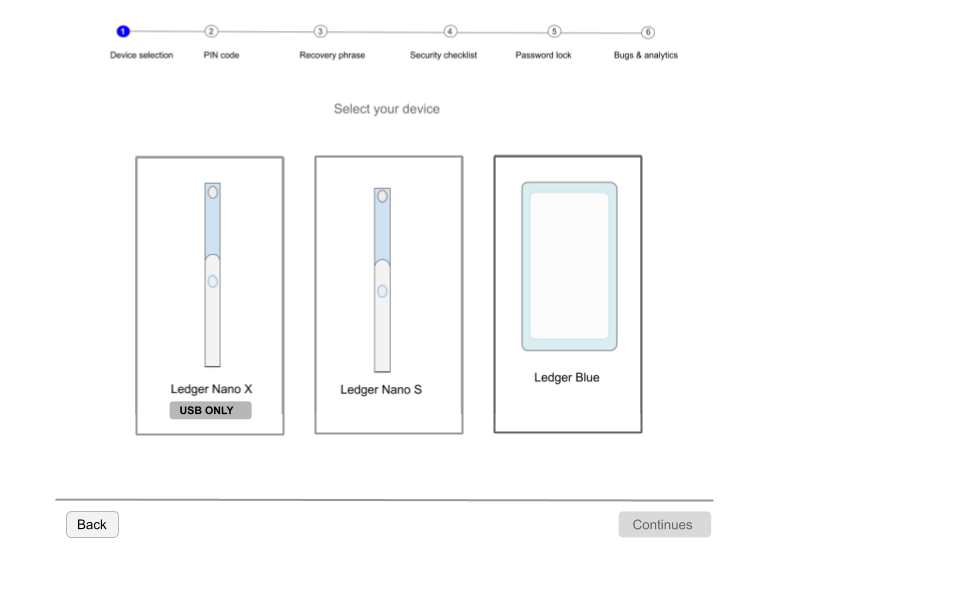 Step 4: Next, you will be shown a sequence of five more instructional steps to follow, on your Ledger device; here are those steps:

For the sake of this review, we will walk you through those steps.

Step 5: Next, you will connect the device to your computer using a USB cable or you will establish a Bluetooth connection.

Step 6: Next, you will be given the option to choose a four-digit PIN, which you will have to confirm after choosing. For the Nano X and Nano S, you will select these numbers using the two navigation keys and after selecting a number, you will click on both keys, together, to choose a specific number. 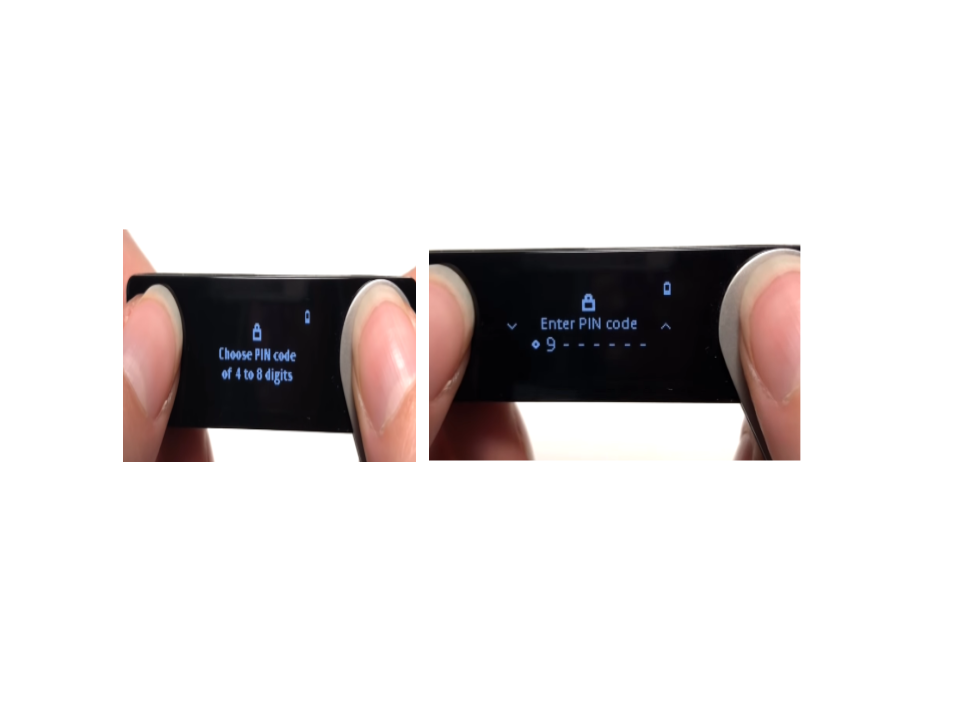 For the Ledger Blue, however, the navigation, selection, and confirmation, is the same as you would with an android device.

Step 7: Next on your screen will appear a sequence of 20-word recovery phrase giving in a particular order. It’s important you write down those words in the order in which they were given.

For the Ledger S and Ledger X, you will have to scroll up and down the 20-word list using the navigation keys. For the Ledger blue, however, it is all spelled out on the screen. Make sure to protect these words in the order in which they came, because you will need them for wallet restoration, in the event of misplacement or damage. 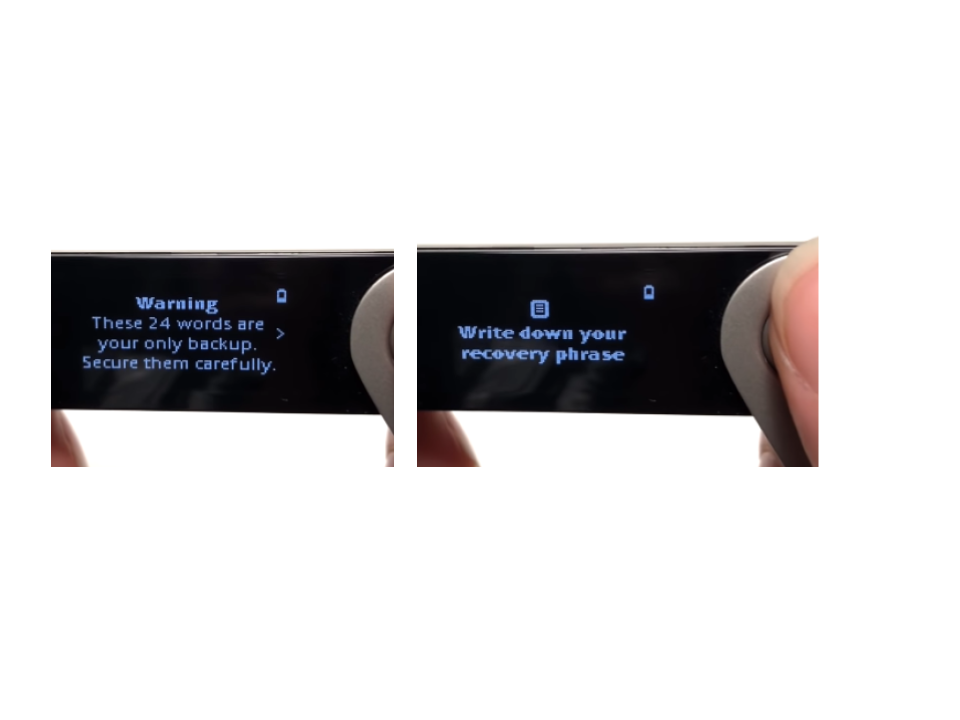 Step 8: Next, on this step, you will be asked by the device to confirm your 20-word phrase. 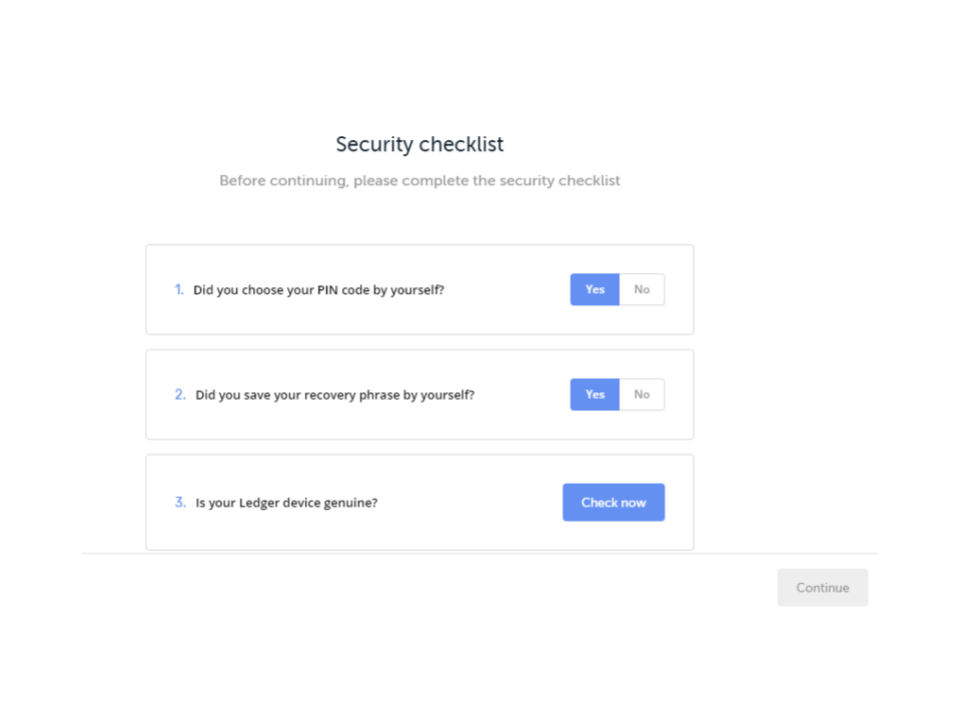 Now the Device is ready to interact with the Ledger Live App.

Step 11: Next you have to setup a password on your App that allows you to access the Ledger App dashboard, where you can create transactions and manage your portfolio on the Ledger Live interface.

Congratulations! Your Wallet is now ready to send, receive, and manage. 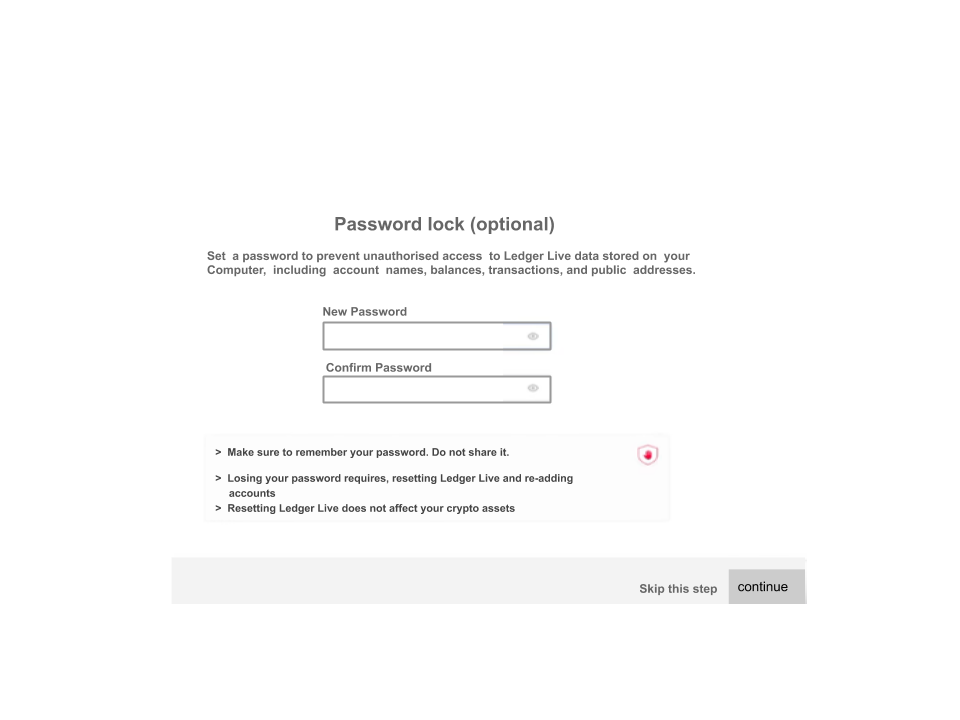 Like we pointed out earlier, the private key for every ledger wallet is irretrievably stored in its memory chip; even the manufacturers don’t have a database where these private keys are stored.

The recovery phrases, however, is an encoding of your private keys, into comprehensible words. This technique is based on the science of mnemonic seed word encoding.

The recovery-phrase is the only way to retrieve a damaged or lost Ledger wallet since it isn’t backed up by Ledger and it’s only created upon setup.  Hence, you must protect it and make sure it’s written in the initial order in which it was given and confirmed.

Once you have your recovery phrase, to recover your wallet, go over to the 2nd step in this setup guide, click on “Restore device from recovery phrase” and follow through with the instructions that will appear.

Finally, while the ledger offers excellent security for large crypto storage, there is, however, the possibility of a security bridge across hardware wallets with the sales of repacked or counterfeited hardware devices.

So, if you decide to get a Ledger wallet, you should confirm the purchase and make sure the device hasn’t been tampered, in any way, shape, or form. Also, for those with the technical know-how, you might want to check out the wallet’s internal hardware build, for any internal alien device or tamper.

Buy, sell, store, and trade crypto through a regulated exchange and wallet...

Earn interest and borrow loans on your digital assets...

A Bitcoin trading platform which does not hold your assets...

Trade in stocks and ETF's through leading social trading platform...

Send, receive, store, borrow, loan and invest, all in one app...

Earn interest in your Bitcoin and Ethereum deposits. Over $50M invested so far.

Trade Bitcoins with trusted vendors in your own local currency...

Buy and sell bitcoins and other cryptocurrencies safely...

Make sure your cryptoassets are safe anywhere you go with our most...